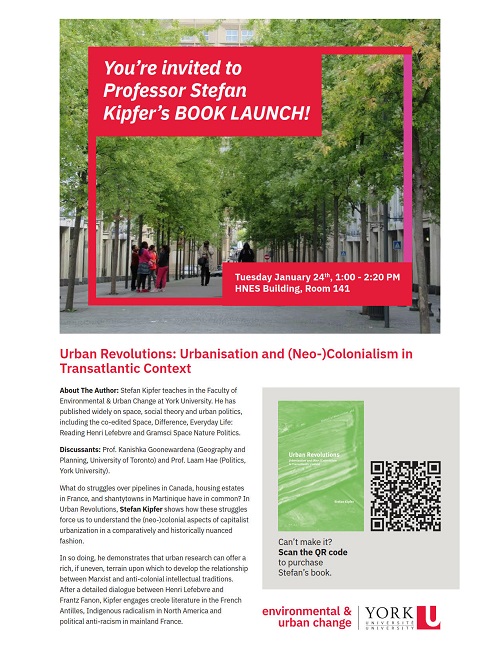 The event will feature some comments on the book by Stefan himself, followed by discussion from two notable scholars of urban politics: Professor Kanishka Goonewardena (Department of Geography and Planning, University of Toronto) and Professor Laam Hae (Department of Politics, York University).

What do struggles over pipelines in Canada, housing estates
in France, and shantytowns in Martinique have in common? In
Urban Revolutions, Stefan Kipfer shows how these struggles
force us to understand the (neo-)colonial aspects of capitalist
urbanization in a comparatively and historically nuanced
fashion.
In so doing, he demonstrates that urban research can offer a
rich, if uneven, terrain upon which to develop the relationship
between Marxist and anti-colonial intellectual traditions.
After a detailed dialogue between Henri Lefebvre and
Frantz Fanon, Kipfer engages creole literature in the French
Antilles, Indigenous radicalism in North America and
political anti-racism in mainland France.