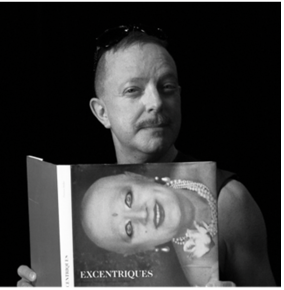 Stephen Lawson is an artist, activist and educator with two decades of experience creating interdisciplinary approaches within the fields of live art, music, print, transmission arts, installation and video. He was a co-founder of the Winnipeg based performance troupe PRIMUS and his work as a director includes radical multi-disciplinary creations with artists such  as Jess Dobkin. Stephen performs internationally with Montreal musician and poet Alexis O’Hara and since 2001 he has been collaborating with artist Aaron Pollard, creating and touring transmedia performances, installations and videos under the moniker 2boys.tv throughout Canada, Central and South America, and Europe. 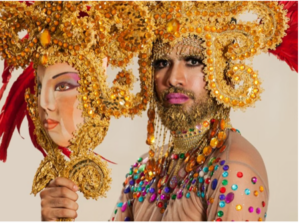 Nicaraguan performance artist, researcher, Elyla, explores through their work the intersections and complexities of identity, sexuality, body politics, and cultural borders. In particular, they focus on “transvestism, fleeting identities and gender bending expressions in indigenous/mestizo rituals in the Americas.” Although Elyla uses different media in their work, they are primarily a performance artist relying on photography, video, and installation. Influenced by their education in social anthropology, theater, and contemporary art, they create performance pieces as an ongoing interaction with their audience that includes many layers of interpretation. Their creative approach is based “on attending rituals, visiting site specific locations and questioning the political context utilizing transvestism or travestismo as a weapon for political action aiming for social change. Although not all my performances or artivist projects involve transvestism.” 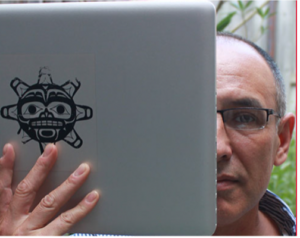 Performance artist, new media artist, filmmaker, writer, curator and educator Archer Pechawis was born in Alert Bay, BC in 1963. He has been a practicing artist since 1984 with particular interest in the intersection of Plains Cree culture and digital technology, merging “traditional” objects such as hand drums with digital video and audio sampling. His work has been exhibited across Canada and in Paris France, and featured in publications such as Fuse Magazine and Canadian Theatre Review. Archer has been the recipient of many Canada Council, British Columbia and Ontario Arts Council awards, and won the Best New Media Award at the 2007 imagineNATIVE Film + Media Arts Festival and Best Experimental Short at imagineNATIVE in 2009.

Archer works extensively with Native youth as part of his art practice, teaching performance and digital media for various organizations and in the public school   system. Of Cree and European ancestry, he is a member of Mistawasis First Nation, Saskatchewan. 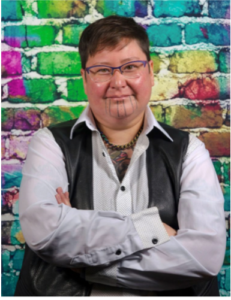 Thirza Jean Cuthand was born in Regina, Saskatchewan, Canada in 1978, and grew up in Saskatoon. Since 1995 she has been making short experimental narrative videos and films about sexuality, madness, Queer identity and love, and Indigeneity, which have screened in festivals internationally, including the Tribeca Film Festival in New York City, Mix Brasil Festival of Sexual Diversity in Sao Paolo, ImagineNATIVE in Toronto, Ann Arbour Film Festival, Images in Toronto, Berlinale in Berlin, New York Film Festival, Outfest,and Oberhausen International Short Film Festival. His work has also exhibited at galleries including the Remai in Saskatoon, The National Gallery in Ottawa, the Whitney Museum of American Art in New York, MoMA in New York, and The Walker Art Center in Minneapolis.  They completed their Bachelor of Fine Arts majoring in Film and Video at Emily Carr University of Art and Design in 2005, and her Masters of Arts in Media Production at X University in 2015. She has made commissioned work for Urban Shaman and Videopool in Winnipeg, Cinema Politica in Montreal, VIMAF in Vancouver, and Bawaadan Collective in Canada. In 2020 he completed working on a 2D video game called A Bipolar Journey based on his experience learning and dealing with his bipolar disorder. It can be found here. She has also written three feature screenplays and has performed at Live At The End Of The Century in Vancouver, Queer City Cinema’s Performatorium in Regina, and 7a*11d in Toronto. In 2017 she won the Hnatyshyn Foundation’s REVEAL Indigenous Art Award. She is a Whitney Biennial 2019 artist. They have made 32 videos and films and counting. Currently she has a feature film in development. They are a non-binary Butch boy who uses She/They/He pronouns. They are of Plains Cree and Scots descent, a member of Little Pine First Nation, and currently reside in Toronto, Canada.