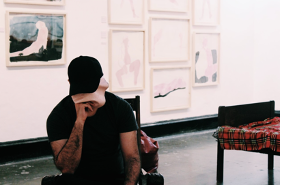 Abdullah Qureshi is a multidisciplinary artist, curator, and educator. Rooted in traditions of abstraction, he incorporates gestural, poetic, and hybrid methodologies to address autobiography, trauma, and sexuality through painting, filmmaking, and immersive events. Through his ongoing doctoral project, Mythological Migrations: Imagining Queer Muslim Utopias, he examines formations of queer identity and resistance in Muslim migratory contexts. Qureshi has exhibited, conducted lectures, paper readings, and artist talks internationally. In 2017, Qureshi received the Art and International Cooperation fellowship at Zurich University of the Arts, and in 2018, a research fellowship at the Center for Arts, Design, and Social Research, Boston. In 2019, he joined the Centre for Feminist Research, York University, Toronto as a visiting graduate student. Qureshi is currently a Doctoral Candidate at Aalto University, Espoo, and Sessional Faculty at OCAD University, Toronto. 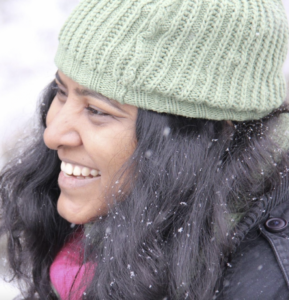 Leena Manimekalai is a leading Tamil poet and a multiple award winning intersectional queer feminist filmmaker with a strong repertoire of films across all genres and lengths. She has been recently selected as BAFTA India Breakthrough Talent for the year 2022. Her award winning films have been widely screened across the world in about hundred prestigious international film festivals. Her work of cinema verite, ‘Sengadal/the Deadsea’ on SriLankan Tamil Refugees and Indian Fishermen won her NAWFF Award at Tokyo for the Best Asian Woman Cinema and was recognized with prestigious Indian Panorama selections after legally winning the initial ban by the Indian Censor Board. One of her documentaries on gender justice, ‘Goddesses’ has won her Golden Conch at Mumbai IFF and Nominations for Horizon Award in Munich and Asia Pacific Screen Award in Melbourne. ‘White Van Stories’ her docu-feature on enforced disappearances in SriLanka, shot entirely underground was broadcast in Channel4 and won accolades in Aljazeera IFF. Her mockumentary “Is it too much to ask ” on transgender rights co-produced with NHK Japan has already won Best Documentary Award at Singapore International Documentary Festival and Jury Mention at the Film South Asia, Nepal. Additionally, Leena has received the Charles Wallace Art Award, the EU Fellowship and the Commonwealth Fellowship for her work in Cinema and Gender. She has published five poetry collections and is currently editing her non-fiction feature ‘Rape Nation’ that traces the lives and struggles of rape survivors across the Indian Subcontinent. ‘Maadathy- an unfairy tale’, her second feature fiction on the invisiblised dalit lives started its journey with a grand opening at 24th Busan International Film Festival with a follow up of good row of festival selections and awards including FIPRESCI JURY AWARD. She is completing her second year MFA in Film at York University, Toronto as a GFAD Fellow.

Leena Manimekalai will be speaking about Trans representation in Indian Cinema. 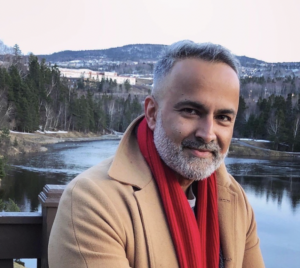 Ian Iqbal Rashid is a poet, television and film maker who works between Canada and the UK. He is known for the films Touch of Pink and How She Move and the TV series This Life and Sort Of, which has recently been nominated for a Peabody Award. Along with many festival prizes, his awards include the Writers’s Guild of Great Britain award for television writing and the Aga Khan Award for Excellence in the Arts. He was the co-founder and first director of Desh Pardesh, Canada’s seminal festival of South Asian arts and culture in the diaspora.  Ian will be speaking about the notion of autobiography in his film and television work.