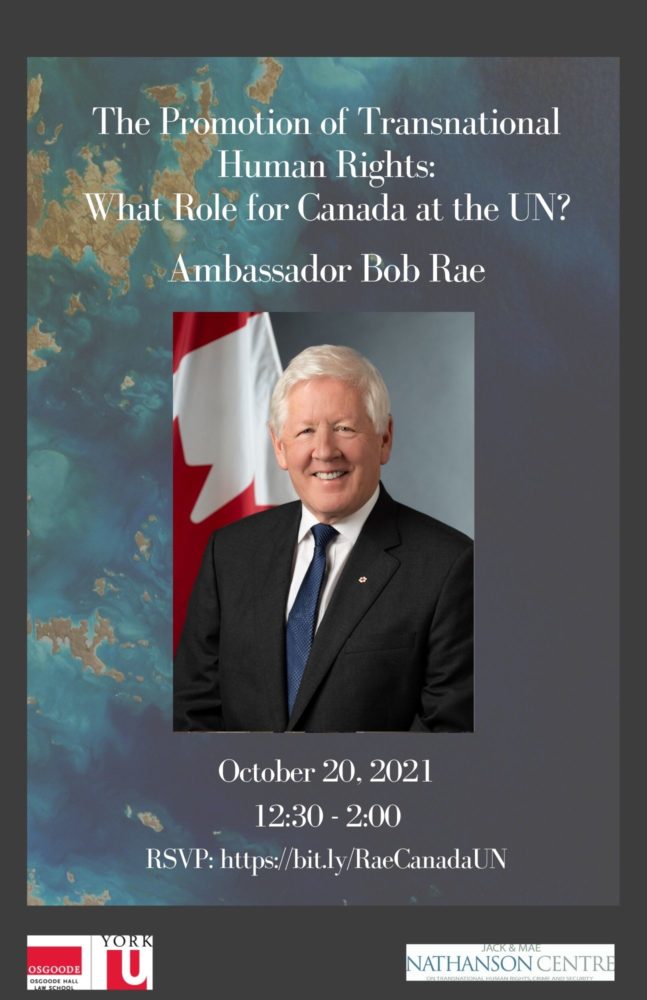 The Promotion of Transnational Human Rights: What Role for Canada at the UN?

Bob Rae is the Ambassador and Permanent Representative of Canada to the United Nations in New York.  Mr. Rae served as Premier of Ontario from 1990 -1995, and interim Leader of the Liberal Party of Canada from 2011-2013. He was elected to federal and provincial parliaments 11 times between 1978 and 2013.

As a lawyer in private practice, Mr. Rae led the restructuring of the Canadian Red Cross, the Toronto Symphony Orchestra, and chaired the board of the Royal Conservatory of Music. He also wrote “Lessons to be Learned” on the Air India bombing and “Ontario a Leader in Learning,” a study of the Ontario higher education system. In 1998, he was named to the Security and Intelligence Review Committee by then Prime Minister Jean Chrétien.

Mr. Rae’s return to Parliament for the constituency of Toronto Centre in 2008 led to his appointment as Foreign Affairs spokesman for his party and to his election as interim Leader in 2011. Between 2013 and 2020 he taught law and public policy at the University of Toronto and was a partner and senior counsel to the law firm OKT LLP, specializing in indigenous law and constitutional issues.