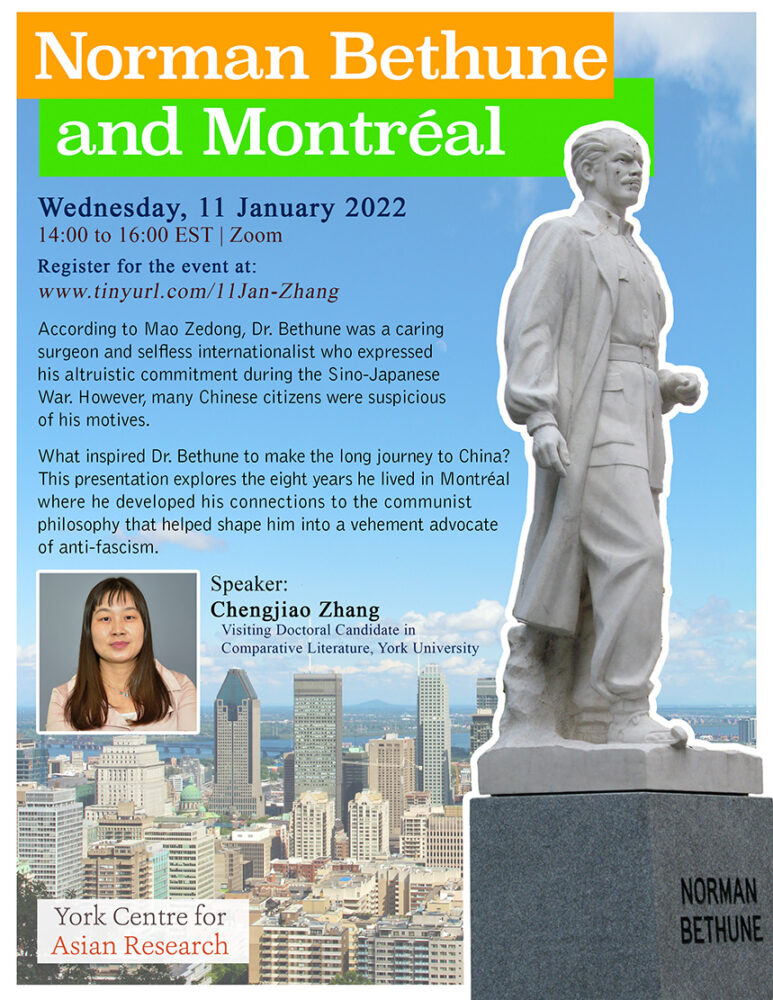 According to Mao Zedong’s article, ” ln Memory of Norman Bethune,” Dr. Bethune was a famous, caring surgeon and selfless internationalist, expressed through his altruistic commitment to soldiers and civilians during the Sino-Japanese War (1937–45). However, many Chinese citizens were suspicious of his motives. If he had a decent job and comfortable life in Canada, why would he venture to China to help the wounded and dying? To clear up those suspicions, one has to examine some of the possible reasons that inspired Dr. Bethune to make the long journey to China. Born in Gravenhurst, Ontario, he earned his bachelor’s Degree from the University of Toronto in December 1916. After spending many years in Europe and the United States, he moved to Montréal where he lived for eight years before departing for Spain and China. This presentation will touch on how and why his connections with Montréal attracted him to communist philosophy and helped to shape him into a vehement advocate of anti-fascism.

Chengjiao Zhang is a visiting doctoral candidate in Comparative Literature at York University and a Graduate Associate at the York Centre for Asian Research. Her home university is Hunan University. Her doctoral research focuses on Dr. Norman Bethune’s image, which she is analyzing from political and cultural perspectives. This presentation is based on fieldwork conducted in Canada during her visit, which was funded in part by a Canada-China Initiatives Fund grant.

Register for the event at: https://yorku.zoom.us/meeting/register/tJwvdemvpjwpHNPwbvBVse1ACrugOEtbshj0