Through the Lens of Co-Showrunner/Executive Producer Annmarie Morais: The Making of The Porter

MASTERCLASS WITH ANNMARIE MORAIS: Co-Showrunner and Executive Producer of THE PORTER (Mondays at 9pm EST on CBC and streaming on CBC Gem)
Moderated by Screenwriting faculty: Ingrid Veninger and Howard Wiseman

Inspired by real events and set in the roar of the 1920s, THE PORTER follows the journeys of an ensemble of characters who hustle, dream, cross borders and pursue their ambitions in the fight for liberation – on and off the railways that crossed North America. It is a gripping story of empowerment and idealism that highlights the moment when railway workers from both Canada and the United States joined together to give birth to the world’s first Black union. Set primarily in Montreal, Chicago and Detroit as the world rebuilds after the First World War, THE PORTER depicts the Black community in St. Antoine, Montreal – known, at the time, as the “Harlem of the North.” They’re young, gifted and Black, from Canada, the Caribbean, and the U.S. via the Underground Railroad and through the Great Migration, and they find themselves thrown together north and south of the colour line, in an era that boasts anything is possible – but if change isn’t coming for them, they will come for it. By any means necessary.

MARCH 29, 2022
3:00 PM – 5:00 PM
REGISTER HERE on ZOOM
After registering, you will receive a confirmation email containing information about joining the event.

ABOUT
In 1999, screenwriting’s most prestigious competition, The Nicholl Screenwriting Fellowship (sponsored by the Academy of Motion Picture Arts & Sciences) made Morais the first Canadian in the program’s history to receive a fellowship with her dramatic feature film script BLEEDING. Her inaugural feature film HOW SHE MOVE was a 2007 Sundance Film Festival Selection, and received worldwide release through US distributor Paramount Vantage in January of 2008. Morais’ work in television has proved equally noteworthy, writing for such major networks as CBS, SyFy and Canada’s Global TV. In 2019, Morais brought her creative talents to BET Network’s groundbreaking scripted series AMERICAN SOUL, penning three episodes on the life of Don Cornelius and his famed “Soul Train” empire. Currently, Morais is executive producer and co-showrunner of THE PORTER. Annmarie Morais is a graduate of York University. 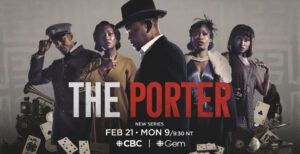